skip to main | skip to sidebar

Following any interesting sites? Try this one: www.twitter.com/medicalmuseum.
Posted by A at 11:36 AM No comments:

Halloween at the Medical Museum

Which costumes won prizes? Funniest: Roadkill; Scariest: The Devil's Minion; Most like something you'd see through a microscope: Plague. With rats, of course.
Posted by A at 6:11 PM No comments:

On Traveling with Treasures

This is posted at the suggestion of a museum colleague and describes a common enough event for frequent flyers but not, perhaps, for the casual traveler. A few years ago I was carrying two secured and hardened suitcases with important artifacts, bringing them from their home in a mid-western city to a museum where they would be on display for a few months. The owners generously agreed to the display but were cautious about their transportation. They required personal couriering and insisted that each suitcase get its own seat on the aircraft with special securing straps, duly paid for, of course; the cases were not to be placed in the hold.

The airline was happy to oblige and all was set. I was scheduled to take the next to last flight out when one of those famous mid-country storms blew up and the passengers in the waiting area began to queue up to be sure they got out that evening, trying to change their flight to the next to last flight rather than risk a layover should the last flight be cancelled. They had already become openly concerned about my carrying the two suitcases, and several business travelers mentioned I could not carry both cases on board; only one bag per passenger. Rather than explain my unusual circumstances, I merely thanked them for their concern. But as the weather looked bleaker and bleaker, these fellow travelers really hit the roof when they realized the cases and I were getting on that plane and some of them weren't. It brought out an unpleasant side of many folks which seemed unusual at the time (pre 9/11/2001), but seems pretty commonplace now--treasures or not. Just in case you wondered, the cases and I sat three across; I was offered but did not accept their share of flight snacks, and we all arrived safely.
Posted by A at 11:11 AM No comments:

See this wonderful drawing in the October newsletter on Marcy Tilton's website.
Posted by A at 2:00 PM 1 comment:

Anatomists are familiar with bundles and tracts of fibers (Bundle of His, etc.). And they're familiar with gastrointestinal systems. But this? Wonderful!! See the creator's site for more: Strange but Trewe. Isn't that great?
Posted by A at 12:17 PM No comments: 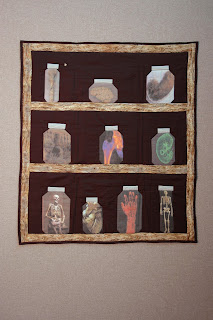 An example of combined interests: A small quilt I made from images of anatomical objects scanned and printed onto fabric. The white "speck" in the upper left, near the lid of the tall jar, is a pewter fly sewn to the surfact of the quilt. My first quilt! It's been given away but it was fun to make, particularly figuring out how to make objects look "jarred."
Posted by A at 12:04 PM No comments:

It took many years of working with a former curator at the Museum before he would be able to see me as an equal coworker and to trust me as a colleague. But one day, not long after he received the news he was terminally ill, he took me aside and told me how he wanted his brain to be sectioned and prepared in order to best show off the features he thought would be of greatest interest to researchers in the future. Later the same day, I was scheduled to present a talk to historians of medicine. The importance of the historical topic paled (I cannot now recall the topic) but I was not willing to share what the curator had asked me to keep confidential until after his death. History happens every monent, I guess, and I've never met more future-oriented scholars than some of those who work in museums.
Posted by A at 1:56 PM No comments:

A
I work in my second favorite museum and am learning to sew.